Sheikh Mohammed bin Rashid Al Maktoum, the UAE’s Prime Minister and Vice President, has spoken on his “pain” after hearing that millions of Arab youth are thinking of quitting their homelands.

Sheikh Mohammed, also the Ruler of Dubai, was responding to the findings of the 12th Annual ASDA’A BCW Arab Youth Survey which were released on Tuesday.

In a series of tweets, he said: “It is painful that half of our Arab wealth wants to emigrate… It is painful when the Arab youth does not find a homeland, safety and livelihood in his homeland.”

“We say that if governments corrupt.. the country is ruined and its security diminished… and its people left it… and every official will be responsible before God. The story does not end here,” he added. 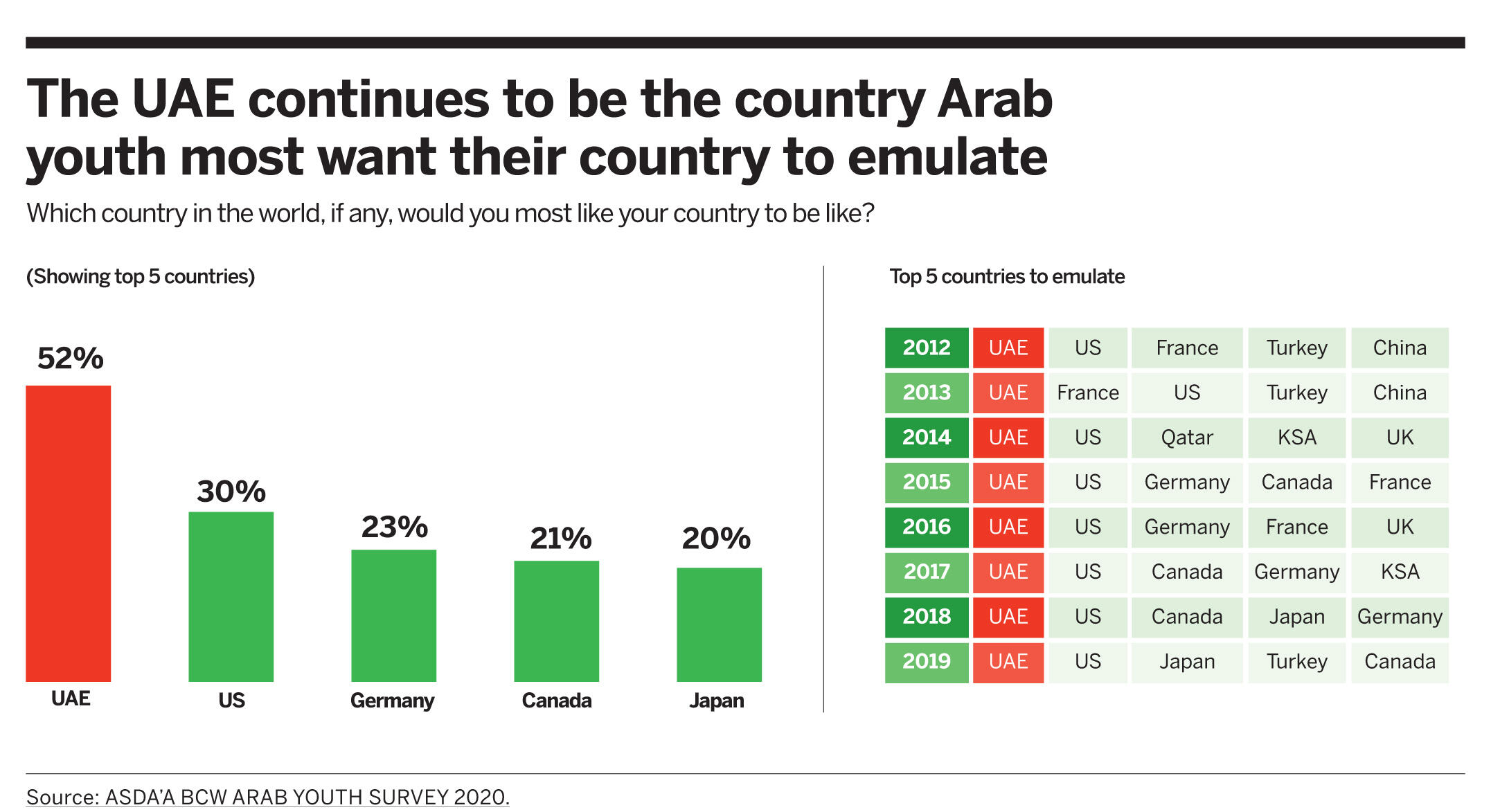 The poll also indicated that the UAE is the preferred country to live in for 46 percent of Arab youth, followed by the United States, Canada, Britain and Germany.

Sheikh Mohammed tweeted in response: “And we say to them: the UAE is everyone’s country… and we have tried to build a successful model… and our experience and our doors and books will remain open to all.”

His comments follow those of the UAE Minister of State for Youth Affairs, Shamaa Al Mazrui, who said the most important message to come from the findings was hope and the “wave of innovation” being led in the region by the younger generation.

“Young Arabs are migrating away from traditional government and private sector jobs to show an increased interest in enterpeunirship and non-traditional work. In the GCC, 55 percent of youth said they would like to start their own business within the next five years. How will governments harness this energy and talent of youth to drive economies and social solutions?” asked Al Mazrui.

She said she believes that the innovation and growth opportunities for youth are “phenomenal”, adding it is high time governments start tapping into that.

“Because the alternatives are unacceptable. The growing gaps in youth education, youth unemployment and positive engagement create ripe conditions for extremism to grow,” she added.

The survey revealed that nearly half of 200 million young Arabs in the Middle East and North Africa (MENA) region have considered leaving their country, frustrated with struggling economies and widespread government corruption. 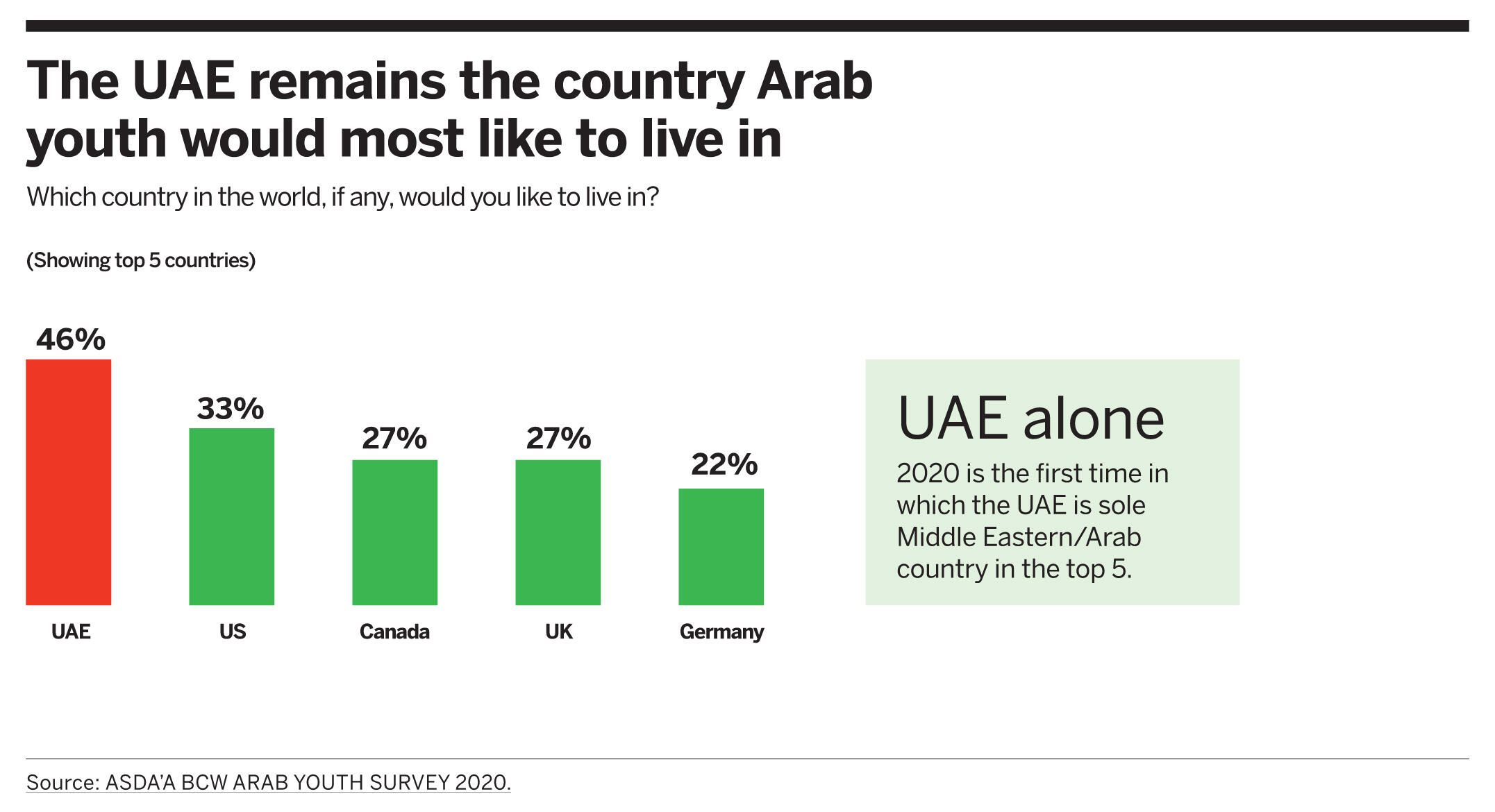 It also highlighted that the coronavirus pandemic has further increased young Arabs desire to emigrate, with one-third of the region’s youth more likely to want to leave their country.

Regionwide, 42 percent of young Arabs have considered emigrating to another country, with the desire to leave most prevalent (63 percent) among youth in the Levantine states of Lebanon, Iraq, Jordan, Syria, Yemen and Palestinian Territories.

The survey said the primary drivers of potential emigration are economic reasons (24 percent) and corruption (16 percent), with educational opportunities, new experiences and safety and security also playing a significant role.

Supply and demand: why Dubai real estate stocks are struggling